Independent candidate running for Lord Mayor, Yvonne Weldon, has revealed her campaign posters for the upcoming local council elections have been replace by posters from the current mayor, Clover Moore.

The two photos show a Yvonne Weldon campaign poster being displayed on a public street light at 11pm on Sunday night.

The second photo, from 2pm on Monday, shows the same street light but the poster has been taken down and replaced by a poster from the Clover Moore campaign.

Ms Weldon told Jim Wilson she will be reporting it to police.

“We pledged to fight fair, and we wish everyone else would,” she said on 2GB Drive. 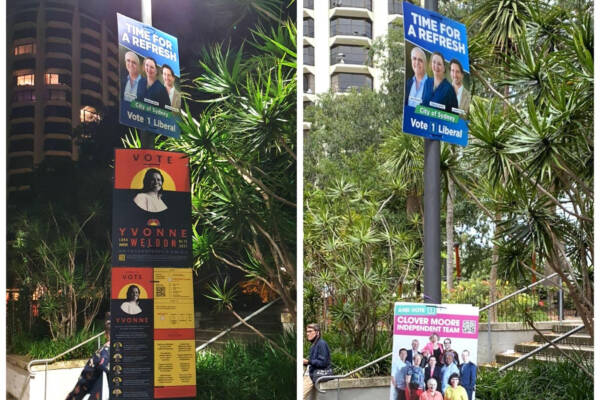 “What we are doing is that we are going to file a police report to track down and see if we can get some CCTV footage to get to the bottom of it.

“It certainly isn’t (to) the benefit of me, but it seems to be benefitting Clover and her team.”

Press PLAY to hear more below

The WugulOra (one Mob) Morning Ceremony at Barangaroo Reserve on 26 January 2022 Welcome to Country by Councillor Yvonne Weldon Deputy Chairperson, Metropolitan Local Aboriginal Land Council Deputy Chair, Australia Day Council of NSW This is a sombre day for the First Nations of...